To share your memory on the wall of Thomas Anderson, sign in using one of the following options:

In addition to his parents and many friends, Tom leaves behind two brothers, Michael Anderson of Jupiter, FL and Jeffrey Anderson of New Hartford, his nephew Hayden Anderson of Sprague CT, his paternal grandmother Janice Anderson of Farmington, CT, many aunts and uncles, and his first cousins Cole, Meg, Kate, Kim, Rick, Matthew, Tony, Alex, Bill, Lauren and Holly, with whom he shared so many family adventures growing up. He was predeceased by his paternal grandfather Richard Anderson, maternal grandparents Sherwood and Arlene Chamberlain, and his aunt Lois Hinners.

Due to covid-19 restrictions, a celebration of Tom’s life will be held at a later date. Memorial donations may be made to Hands of Grace Food in New Hartford, CT. The Vincent Funeral Home of Canton is caring for arrangements. Please visit Tom’s “Book of Memories” at www.vincentfuneralhome.com
Read Less

We encourage you to share your most beloved memories of Thomas here, so that the family and other loved ones can always see it. You can upload cherished photographs, or share your favorite stories, and can even comment on those shared by others.

Plant a Tree in Memory of Thomas
Plant a tree 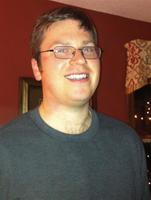