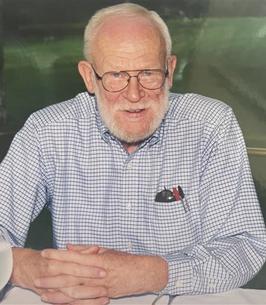 Bob grew up in Danbury attending Danbury public schools. He graduated from Danbury High School in 1952. He attended Tufts University in Medford, MA from which he received a Bachelor of Science in Civil Engineering in 1961. At Tufts, he was a member of the Delta Tau Delta fraternity. He received a Master of Science in Sanitary Engineering from Harvard University in 1962.

Bob’s undergraduate career was interrupted by service in the U.S. Air Force from 1954-58. During his service, he was stationed at Lowry Air Force Base, Colorado and, primarily, at Bitburg Air Base, Germany. Bob served as a Nuclear Specialist and a Weapons Fusing System Specialist. At Bitburg, he was deployed with the 1st Pilotless Bomber Squadron, the 1st Tactical Missile Squadron, and the 585th Support Squadron.

Upon graduation from Harvard, Bob began his career with the State of Connecticut Water Resources Commission, Hartford, CT. At that time the Water Resources Commission was the agency responsible for the state water pollution control program. He was the Principal Sanitary Engineer with the commission and was named the Director of Compliance for the Division of Environmental Quality when the Department of Environmental Protection was formed in 1971; he was named the Director of Water Compliance and Hazardous Substances for the DEP in 1972. Bob left state service in 1981 at the end of a two-year intergovernmental assignment to the U.S. Environmental Protection Agency in Washington D.C. as a Staff Specialist to the Assistant Administrator of Water and Waste Management. During his tenure with the State, Bob was known for his uncompromising sense of ethics and unwavering propriety.

Upon leaving state government, Bob was employed by the Hartford Steam Boiler Inspection and Insurance Company (HSB), Hartford, CT for five years. At HSB he was responsible for the management of environmental impairment risk assessment activities associated with the placement and reinsurance of Environmental Impairment Liability (EIL) insurance. Bob joined Loureiro Engineering Associates, Inc. (LEA), Plainville, CT in 1988 as a Senior Project Manager representing both industrial and municipal clients in their efforts to comply with environmental regulatory programs or to respond to enforcement initiatives. He retired from LEA in 2015.

Bob was married to Marjorie Ruth Bolz on June 25, 1960 in Huntington, NY. Their courtship began while Bob was in the Air Force and Marge would write letters to him on behalf of his best friend from high school, who was her boyfriend at the time.
Bob and Marge moved to Weatogue in August, 1962 and have lived in the same home for almost 59 years. In addition to his wife, he is survived by a son, Aaron Winter Taylor and his wife, Taylor Thompson Taylor, of Pound Ridge, NY; two daughters, Betsey Taylor Zackeo and her husband, Dominick Zackeo, of Weatogue, and Nell Bouton Taylor-Christy and her husband, Harold A. Christy, of Washington, DC; and two grandchildren, George Kemp Taylor of Pound Ridge and Madeline Taylor Zackeo of Weatogue. In addition to his parents, Bob was pre-deceased by his brother, Roger Holm Taylor.

The family will welcome callers to celebrate a life well-lived on Thursday, June 24th from 5:00 PM to 8:00 PM at the Vincent Funeral Home, 880 Hopmeadow Street in Simsbury, CT. Donations in Bob’s memory may be given to the Science and Engineering Complex at the Tufts University School of Arts, Sciences & Engineering at tuftsgiving.org. Please visit Bob’s “Book of Memories” at www.vincentfuneralhome.com