To share your memory on the wall of Betty Jo Keirstead, sign in using one of the following options:

In 1973 Betty became an administrative assistant for the director of conference planning at Cigna Corporation, eventually becoming the director of the department. She enjoyed the opportunities to travel as part of her work and continued to travel widely after she retired in 1992. In retirement she became more active as a member of First Church of Christ in Simsbury, Connecticut, including working part-time in the church office and singing in the choir. During her residence at the McAuley community in West Hartford, she served as secretary and later president of the Residents Association. She was an active R-MWC alum as well as an “honorary alum” fan of Dartmouth College football.

Betty spread the joy of music to all. Raised in a musical family, she studied piano and voice and was a choir member throughout her life and a soloist for various churches. She sang in several amateur productions of Gilbert and Sullivan’s operettas. She also enjoyed golf, tennis, and skiing.

The family is planning a memorial service for Betty to be held later this year. The family suggests donations to the First Church of Christ, 689 Hopmeadow Street, Simsbury, Connecticut 06070, or the National Multiple Sclerosis Society.
Read Less

We encourage you to share your most beloved memories of Betty Jo here, so that the family and other loved ones can always see it. You can upload cherished photographs, or share your favorite stories, and can even comment on those shared by others.

3 trees were planted in the memory of Betty Jo Keirstead

Posted Apr 23, 2021 at 07:07am
Dear Bee & Gary, and Keirstead Family,
My sincere condolences to you on the passing of your Mom. She was always kind and generous with her heart and time. Again, I am sorry for your loss.
Comment Share
Share via: 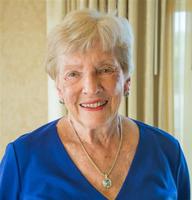